Tottenham will not change their approach to Monday’s Premier League clash with Manchester City despite Pep Guardiola’s side arriving at Wembley unbeaten in 2018-19.

Spurs head into the match having lost 10 of their last 15 league matches against City and, with the visitors having recorded seven wins already this season, they face another tough challenge.

City’s flamboyant attacking play has delivered 26 goals, while at the back only three goals have been conceded by number one Ederson.

Despite the odds appearing stacked against them, Pochettino is keen for his side to keep playing their own attacking brand of football, even if it could prove costly.

“You cannot change your approach [just] because the opponent is good like Manchester City, or change your mentality,” he said in a video released by Tottenham on Twitter.

“We are going to try, with and without the ball, to have a strategy and try to win the game, that is the most important thing, playing in the way that we always play.” 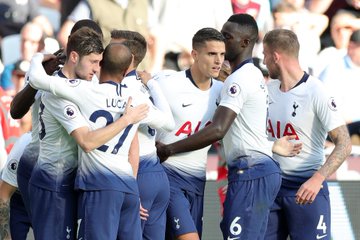 And the Colombia international is relishing the chance to test himself against the league’s best.

“I’m excited for it as we will be playing one of the best teams in the league,” he told the club’s official website.

“I think the most important thing ahead of the game is how we feel, how we prepare for the game.

“We have to be ready to compete and to try to get the three points to keep fighting near the top.

“I feel very good at the moment. I’m feeling confident and I’m looking forward. I will keep fighting for the team because we have a great squad here and great staff to help us to learn and improve our game.

“Every game we have to be ready to win and show our best to help our team-mates. We will certainly give our all [against City].”