It was a “dream come true” for Richarlison as the Brazil forward marked his starting debut with two goals against El Salvador.

Everton star Richarlison scored in either half to lead Brazil to a 5-0 rout of El Salvador in Tuesday’s international friendly.

After coming off the bench to make his debut against the United States last week, Richarlison was named in the starting XI and netted two fine goals in Maryland.

Speaking afterwards, the 21-year-old – who has netted three goals in as many Premier League matches for Everton this season – said: “I’m very happy, right. A dream come true … my first goal. I hope to do more.” 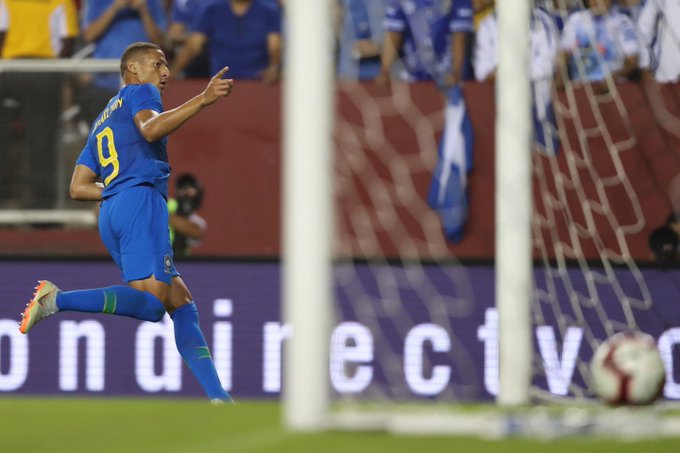 Richarlison earned a second-minute penalty, albeit harshly on El Salvador as Roberto Dominguez appeared to get a foot on the ball, before captain Neymar converted.

The former Watford attacker then doubled Brazil’s lead with a stunning first-time finish in the 16th minute before he scored the team’s fourth of the night – another fine effort five minutes into the second half.

Richarlison, who linked up well with Paris Saint-Germain star Neymar, added: “I’m very happy for both goals. I was able to take advantage of the opportunity.

“I just have to thank my friends. I have to work hard at my club to come back more often.”