Trippier curled a set-piece past Croatia goalkeeper Danijel Subasic to give England the lead in the World Cup semi-finals, though the Three Lions went on to lose 2-1 after extra time.

As England prepare for Saturday’s UEFA Nations League opener against Spain before facing Switzerland three days later, Trippier told reporters: “I’m not going to lie to you I’ve watched it back about 100 times.

“Obviously I enjoyed that moment but even now it still hurts that we got beaten. But I did watch it back about 100 times I’m not going to lie to you.” 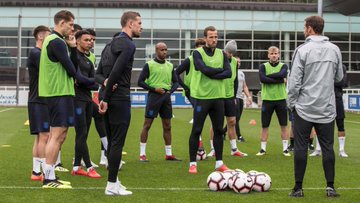 Trippier has established himself for club and country thanks to his consistent performances but asked about the possibility of being dropped by England manager Gareth Southgate, the 27-year-old replied: “Obviously all the boys here are doing well here and for their clubs though, so that’s the manager decision, if I play or don’t play.

“Every opportunity on the playing field I try and do my best 100 percent to show the manager that I want to play and just keep improving but it’s the manager’s decision at the end of the day or who he selects.

“So like I said before if I don’t play I’m not going to be disappointed, I’ll help the team-mates, but I’ll be training as hard as I can to make sure I want to be picked.”